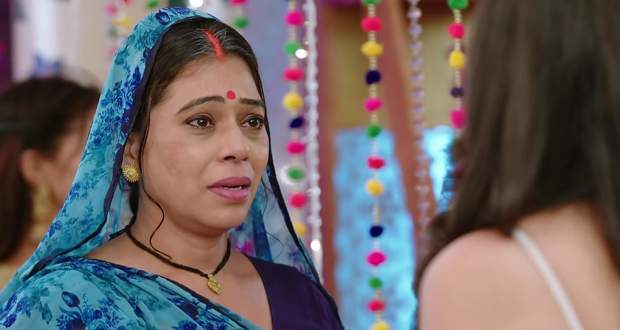 Today's Molkki 17 September 2021 episode starts with Purvi addressing her mother as Maa which shocks everyone while Prakashi says that she is the manager's wife.

Purvi apologizes and says that she felt like calling her a mother while Prakashi makes an excuse and everyone goes back to their work while Virendra scolds Prakashi.

At night, Prakashi instigates Daksh against Virendra saying that he brought Purvi's mother to the function and didn't care about Purvi's health.

Virendra tells Purvi's mother to stay around her as he is sure that Purvi is soon regained her memories.

Later, Purvi refuses to have dinner and tells the servant to take the food away when Purvi's mother comes there and talks to her.

She calls Purvi her daughter and feeds her while Purvi gets emotional saying that she wishes she knew who her mother was.

Daksh sees Virendra looking into Purvi and her mother's conversation and thinks to form a plan to save Purvi from Virendra's traps.

Purvi is standing on the terrace when Virendra comes there and asks her why she is upset and alone.

She tells him her feelings about how she is missing her mother and feeling like an orphan.

He tells her that she might even have a husband and kids which she doesn't know of and she starts thinking.

She says that if she has a husband, he might be waiting for her and says that she cannot marry Daksh until she finds out about her family.

He tells her to close her eyes and find the answer while he gets shocked seeing Virendra's face.

She is about to tell him when Daksh comes there and tells her to go to sleep.