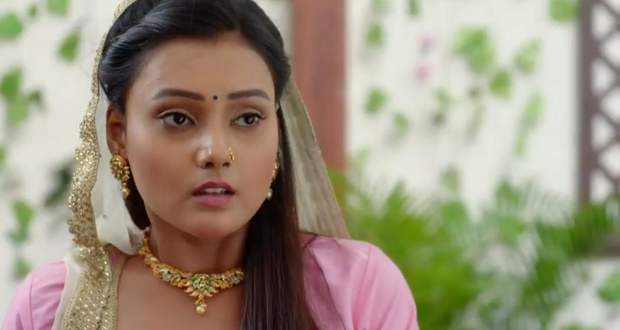 Priyu sees a shadow but thinks nothing of it while Virendra puts Purvi to sleep.

Vaibhav gets a call from his friend who reminds him of his bet and informs him that they are coming to his house tomorrow.

Virendra feeds Purvi and tells her that Sakshi's portrait is done on time only because of her and shows his gratitude to her.

Prakashi tells Purvi that she has a gift for her which makes her feel excited.

Sudha hides a gun under her clothes but feels worried when she sees security guards at the entrance.

Virendra's uncle praises the portrait of Sakshi and says that his old self is coming back due to Purvi but Virendra declines and goes.

Sudha hides the gun in milk containers and easily goes through security.

Meanwhile, Juhi and Manas shoot flowers at guests and it hits Priyu.

Priyu scolds the kids while Purvi comes here and feels happy to sees her sister.

A mysterious lady enters the house while Priyu reveals to Purvi everything that happens to her.

Parakshi takes Purvi and leaves while a servant informs Priyu that Sudha is calling for her.

Elsewhere, Sudha empties all the milk containers but doesn't find her gun while it is revealed to the viewers that the mysterious last has the gun.

The priest tells Virendra that he has to sit with his wife after which Purvi sits with him.

Upcoming Molkki episode update: Purvi to be attacked by Sudha and mysterious lady.

© Copyright tellybest.com, 2020, 2021. All Rights Reserved. Unauthorized use and/or duplication of any material from tellybest.com without written permission is strictly prohibited.
Cached Saved on: Tuesday 2nd of March 2021 08:58:36 AMCached Disp on: Wednesday 3rd of March 2021 11:36:56 AM