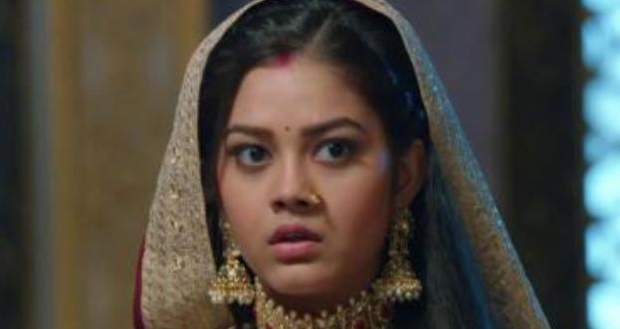 Today's Molkki 18 February 2021 episode starts with Virendra and Purvi sharing an eye lock while she starts laughing and demands a red rose and heart balloon from him.

He tries to reason with her but she refuses after which he brings a bouquet of rose and a balloon and gives it to her.

She tells him that today is Valentine's day and talks about confessing their love while he tells her to come home.

Purvi gets on her knees and gives him the bouquet after which he holds her as she starts feeling sleepy.

She tells him I love you in his ears while he gets tense.

She goes to check on the kids while she overhears Vaibhav looking for his password.

Prakashi sees her and tells her to help them find the passport.

The kids leave while Purvi looks under the bed and finds blood marks.

She asks Vaibhav about it while Prakashi tells her that a rat might have died.

Purvi goes to Virendra to ask him for breakfast but he goes away in the car seeing her.

Purvi reaches college while the students look at her strangely.

She decides to teach Karan a lesson and goes to him.

She tells him that she wants to start fresh and offers to buy him juice while he agrees.

However, she pours the juice all over him and tells him to go clean up.

He goes to the washroom while she locks the door and puts a work in progress board in front of the door.

Virendra wonders how to get away from Purvi after knowing her feeling for him as he can't even look her in the eye and goes to the terrace.

The kids look at him and send Purvi to the terrace and lock the door.

Purvi notices Virendra and makes a noise intentionally but he doesn't look at her.

She tries to open the door but isn't able to while Virendra asks her what happened.

She tells him that someone might have locked the door while thinking that it is god's plan.