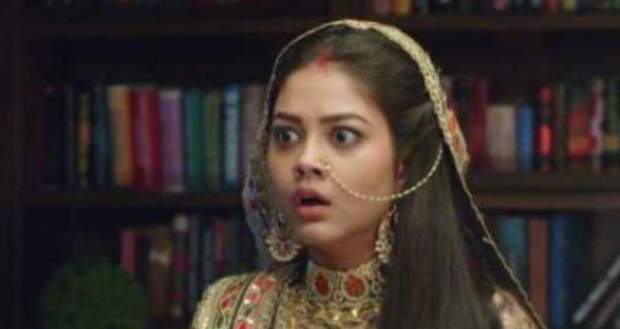 Today's Molkki 18 January 2021 episode starts with Virendra telling the police to watch out for Purvi at the pharmacy as she will surely go there to get medicine for her sister.

Elsewhere, Vaibhav and his friends are drinking while one of his female friends tells him that she needs to talk to him.

They go out of the room and argue while Purvi sees Virendra and hides from him.

Sudha tells her to go inside the Dargah so that no one can find her.

She tells her to not come to her as she can be caught by the police but Sudha isn't able to hear due to the loud noises in the background.

Purvi steals the traditional Muslim Burkha and wears it after which she amd Priyashi go inside the Dargah.

Elsewhere, Virendra sees Sudha coming there and tells the police to follow her as she will lead them to Purvi.

Purvi removes the bullet from Priyashi's hand while she gets shocked to Sudha.

She gets fearful of seeing Virendra and police behind Sudha.

Virendra takes Purvi aside and confronts her asking why she had to betray his kids.

Purvi says that she hates him and is angry with him cause he always punished her and never gave her the rights as his wife.

However, Virendra tells her that he supported her in every step she took and tells the police to arrest her.

Purvi gives the cell phone to Sudha as police take her away while Virendra looks on.

Later, the kids are informed that Purvi is found and get happy thinking that she will come back while Virendra comes there and tells them that Purvi will never enter their house again.

The kids get sad and go to his room crying.

Purvi thinks to herself that he will gain back Virendra's trust after she finds out who is the blackmailer.

Priyashi and Sudha come to meet her and she tells Sudha to call that number again.

A message comes from the number that Priyashi's video will be up on the internet at 2 pm the next day.

Upcoming Molkki episode update: Purvi gets sick in the jail.