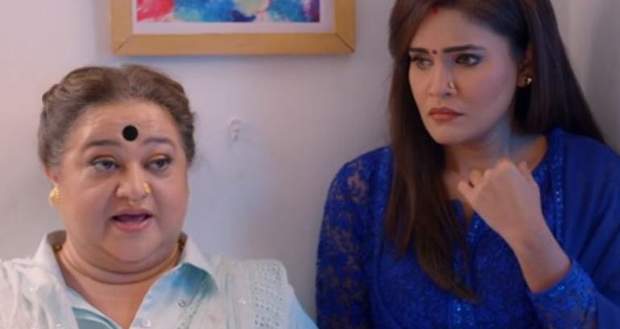 Today's Molkki 18 June 2021 episode starts with Purvi thinking about Vipul while Virendra comes there to ask how is she.

He asks her if she loves Vipul and she confirms that she used to love Vipul but now loves only him.

She goes to meet Vipul and asks if he came to her wedding and he agrees that he came to expose the truth about Molkki marriage but her father had gotten him beaten.

He tells her that she's not happy being a Molkki but now they can be together and she leaves.

The next morning, Anjali calls Mr. Sharma and tells him to come to the haveli and introduce Vipul as the new manager to them.

Later, Vipul is about to leave while Sakshi fails to stop him.

At the last minute, Mr. Sharma comes there and introduces Vipul as the new manager of the haveli making Sakshi happy.

Afterward, he plays with the kids and injures his hand while Purvi bandages his wound.

Sakshi plans to get them together and makes Purvi cook Vipul's favorite dish.

Sakshi lies at the dinner table that Purvi made it especially for him while Virendra leaves.

© Copyright tellybest.com, 2020, 2021. All Rights Reserved. Unauthorized use and/or duplication of any material from tellybest.com without written permission is strictly prohibited.
Cached Saved on: Thursday 29th of July 2021 03:30:37 AMCached Disp on: Sunday 1st of August 2021 05:47:27 AM