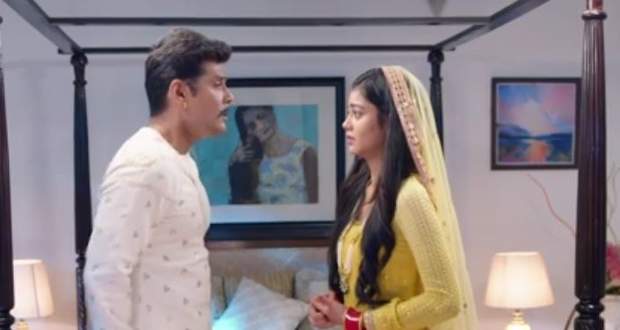 Today's Molkki 18 May 2021 episode starts with Purvi teaching study for Manas and Juhi.

Juhi tells Sakshi about Purvi that she is joined college for studying.

Later, Virender asks Purvi to stitch his shirt button but she refuses and says that ask Sakshi to stitch.

Prakashi calls her villager and asks him to come and give justice to Virender and Sakshi.

On the other hand, Purvi sees Virender in her room.

Virender asks Purvi about ignoring him and Purvi replies that care about Sakshi who is his real wife.

Purvi says that she doesn't want to betrayal the trust of Sakshi.

Villagers come to meet Virender and say that accept Sakshi as his real wife.

Meanwhile, Sakshi obstructs Villager's words and tells them that Purvi is also the real wife of Virender which makes everyone gets shocked.

© Copyright tellybest.com, 2020, 2021. All Rights Reserved. Unauthorized use and/or duplication of any material from tellybest.com without written permission is strictly prohibited.
Cached Saved on: Monday 29th of November 2021 06:08:43 PMCached Disp on: Wednesday 1st of December 2021 03:45:42 PM