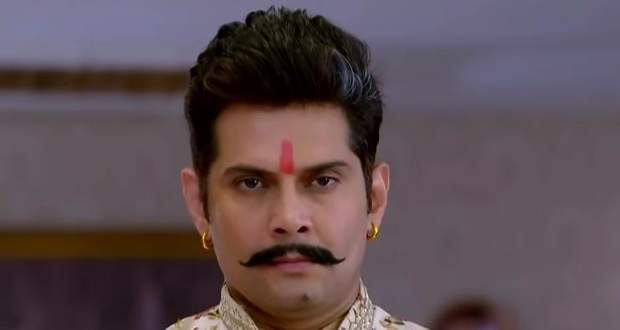 Today's Molkki 19 April 2021 episode starts with Virendra and Bheem questioning who gave out false information while it is revealed that Jagan lied and that he has been fired for a few days.

Flashback shows Anjali bribing Jagan to lie so that Virendra isn't present at the hearing.

Meanwhile, the Panch pronouns Purvi guilty and punish her to walk on burning coal.

Purvi thinks why they gave her hard punishment as Virendra had promised to make them give her an easy punishment.

Bhuri and a few ladies start taunting Purvi while Purvi shouts that she will not accept the punishment.

Prakashi finds out that Virendra has arrived and orders the servants to hide the burning coal from him and they comply.

Virendra and Bheem come inside while Purvi tells him that she won't accept the decision made by Panch which confuses Virendra.

Purvi confronts Virendra and says that she is treated the way she is being treated because she is not a Daughter-in-law but a Molkki.

She tells him that she can't accept the punishment or this Molkki relationship and says that she will pay off her Mol.

Purvi packs her bags while the kids come there and ask her if she fought with Virendra.

They lie and the kids make them hug each other to confirm.

Virendra tries to convince Purvi to stay but she tells him that he wouldn't have judged her if it was Sakshi which leaves him speechless.

© Copyright tellybest.com, 2020, 2021. All Rights Reserved. Unauthorized use and/or duplication of any material from tellybest.com without written permission is strictly prohibited.
Cached Saved on: Thursday 29th of April 2021 01:59:50 PMCached Disp on: Thursday 6th of May 2021 06:37:55 AM