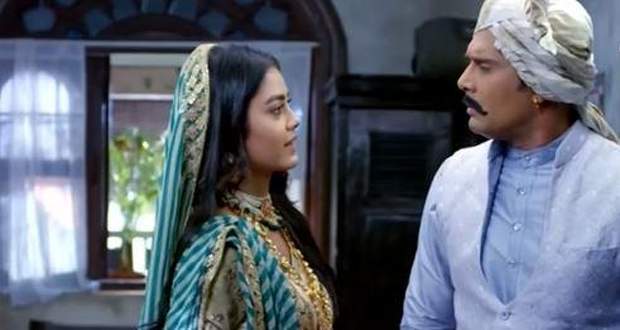 Today's Molkki 19 July 2021 episode starts with Veer gifting Virendra wheelchair to sit on and go around as he has gotten bed rest for weeks while Sudha is touched by Veer's help.

However, Priyashi thinks otherwise and says that he is just doing it to repent as his sister is the reason for Virendra's injury.

Later, Purvi and Virendra talk to Veer and Nandini while Purvi reveals to him that she went to Charansingh's house and that they are coming to talk to them about Nandini and Aarav's alliance.

However, Virendra refuses to accept the alliance and gets angry at Purvi instead.

The next morning, Charansingh and his family come there while Purvi requests Virendra to think about Nandini and talk calmly.

Charansingh and his family enter the Haveli and sit while Virendra comes there will a sullen face.

They argue which Charansingh tells him that he is there to accept the alliance as the family will get disrespected if Nandini elopes with Aarav.

Virendra leans forwards and asks Charansingh what his real intentions are and he reveals that he wants the village.

Further, Virendra insults them and kicks them out of the house while Nandini pleads with Aarav to not leave her.

Later, Purvi and Virendra go to Nandini's room but she argues with them and says that they cannot see her happy.

She storms out of the room while Purvi tells Virendra to give her some time.

Virendra wonders how to talk to Nandini while Veer goes to Nandini and feeds her.

She tells him that she has made up her mind and calls Aarav while Veer looks on.