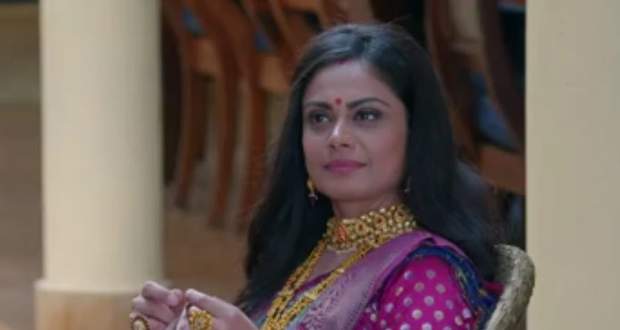 Today's Molkki 19 May 2021 episode starts with Prakashi rebuking Sakshi for naming Purvi as the real wife of Virendra.

She also says that because of her Sakshi is back in Virendra’s life as his wife.

Sakshi tells Prakashi that she won't let her interfere with her family.

By listening to this, Prakashi decides to spoil the relations of Purvi and Sakshi's with Virendra.

Later, some of the villagers come to invite Virendra to the painting competition and they ask that he should participate in it.

Sakshi asks Virendra to go shopping but he consoles Sakshi and takes her to the garden for fresh air where Purvi is playing with Juhi and Manas.

Prakashi and Anjali discuss Purvi not leaving Virendra after Sakshi's return while Purvi listens to them.

Purvi cries and thinks about leaving Virendra and the children.

Meanwhile, Virendra enters Purvi’s room and Purvi pleads with him to stay away from her because of Sakshi.

Virender explains to Purvi that how much he loves her and also says that he can't stay away from her.

Purvi consoles Virendra by taking him close to her heart while Anjali takes a photo of them on her phone.

Anjali blackmails Purvi with that photo and asks Purvi to give the necklace.

Purvi pleads with Anjali to delete the photo and asks her not to show it to Sakshi.