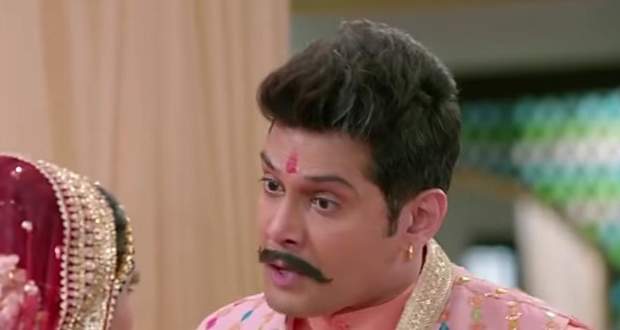 Today's Molkki 19 November 2021 episode starts with the villagers insulting Renu while Sakshi thinks that she should go forward to save her when suddenly Purvi comes forwards and scolds the ladies for blaming Renu instead of their husbands who go to see the dancers.

She further tells her to look inside her house first and then think about blaming Renu after which she goes to Virendra and tries to convince him to understand Renu's situation.

Virendra states that Renu will stay in the outhouse while Purvi shuts some ladies who oppose the decision.

Later, Sakshi tells Prakashi that she will make Renu disappear and will further instigate Virendra that Purvi insulted him by bringing in a dancer who humiliated them.

At night, Sakshi tells some men to kidnap Renu and they kidnap her while Purvi overhears some sounds and goes to save Renu with a gun.

She fires a shot and Virendra comes there hearing the shot and saves them while fighting with the men and see the scar on a man's face as he runs away.

Anjali and others come there and she insults Renu when Virendra threatens to shoot her.

Purvi suggests bringing Renu in the haveli he agrees and goes inside while Prakashi taunts Sakshi.

Inside the haveli, Purvi decided to sleep with Renu and Virendra agrees.

The next morning, Renu thanks Purvi for supporting her while Sakshi sees then and gets jealous.

Upcoming Molkki episode update: Virendra finds the kidnapper in the market and fights.

© Copyright tellybest.com, 2020, 2021. All Rights Reserved. Unauthorized use and/or duplication of any material from tellybest.com without written permission is strictly prohibited.
Cached Saved on: Thursday 20th of January 2022 04:40:54 AM