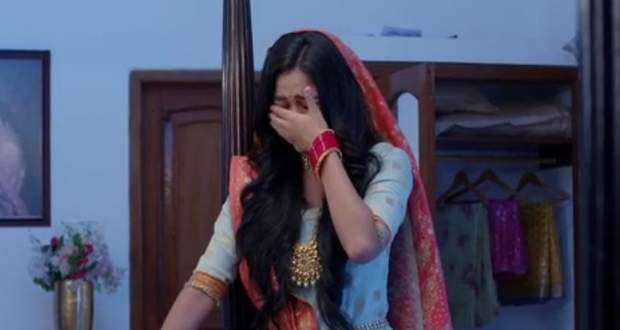 Today's Molkki 1 June 2021 episode starts with Purvi packing her bags to leave for her village.

Sakshi replies that she has a strong reason to send Purvi to her village and to give her a beautiful life rather than the wife of an old man.

Later, Juhi asks Purvi to make the birthday party preparations for Manas while she is packing her bags.

Afterward, Sakshi asks Purvi to stay until the party ends and gives the bus tickets to Purvi which are booked for the evening.

By overhearing their conversation, Prakashi and Anjali feel happy that Purvi is leaving.

On the other hand, Virendra feels sad for Purvi going to the village while Purvi returns the gifts to him which he gave to her.

Meanwhile, in the kitchen, Juhi and Manas ask Purvi and Sakshi to prepare a cake together for Manas.

After some time, Sakshi and Purvi get emotional about Purvi leaving while Virendra observes them.

© Copyright tellybest.com, 2020, 2021. All Rights Reserved. Unauthorized use and/or duplication of any material from tellybest.com without written permission is strictly prohibited.
Cached Saved on: Monday 6th of December 2021 08:39:56 AM