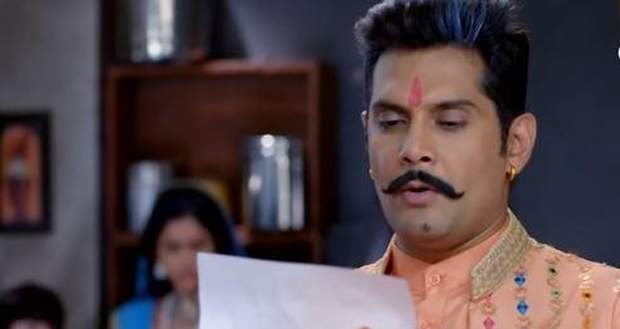 Today's Molkki 20 July 2021 episode starts with Purvi singing to help Virendra sing but he tells her that he is having a headache.

Meanwhile, Nandini gets a call from someone and leaves with Aarav after writing a letter.

The next day, Veer is trying to wear a turban and Sudha interacts with him by helping him with it.

However, Anjali instigates Priyashi saying that Veer is going to become the next Mukhya and that she should not let Sudha snatch the opportunity of becoming Mukhiyani.

Elsewhere, Purvi gets shocked seeing the letter and learns that Nandini has run away.

She informs Virendra about the letter and he says that Aarav and Charansingh have trapped Nandini in their plan and she is not understanding it.

He says that he will have to save Nandini and tries to stand up.

However, Purvi stops him and says that his anger is the reason for Nandini running away but he tells her Nandini would not have been happy in Charansingh's house.

Purvi tells him that Aarav loves Nandini and reminds him that Nandini is an adult who can take her own decisions.

Meanwhile, Charansingh calls Virendra and invites them for Nandini's marriage.

Later, Virendra decides to go to college but Purvi stops him saying that they cannot do anything as Nandini is an adult.

Virendra leaves to stop the marriage but Purvi stops and wonders whom to support.