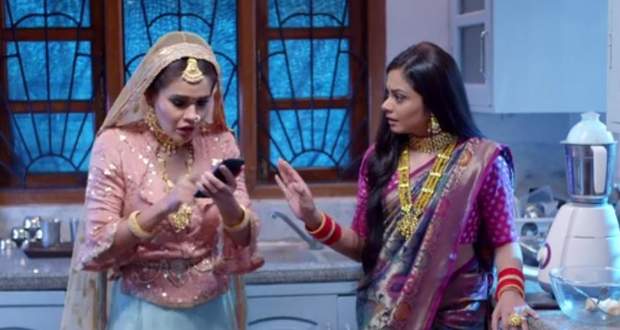 Today's Molkki 20 May 2021 episode starts with Anjali trying to show the photo of Virendra and Purvi together to Sakshi.

Meanwhile, Juhi and Manas knockdown Anjali by hitting her with a bicycle.

When Anjali again tries to show the photo to Sakshi, Juhi and Manas obstruct her to save Purvi.

Juhi and Manas again knock down Anjali while Purvi deletes the photo on Anjali's phone.

Later, Virendra brings a new dress for Purvi to wear on the day of the Painting competition.

He also says that he is going to draw Purvi's painting in the competition.

Purvi tells Virendra to draw Sakshi's painting if not Sakshi will get upset but Virender doesn't listen to Purvi.

Virender and the children make a plan to draw Purvi's painting instead of Sakshi's.

Juhi and Manas ask Sakshi to play with them while the painting competition is going on.

Further, Virendra corrects Purvi's posture for painting and he wins in the competition which makes everyone happy.

Prakashi and Anjali manipulate Sakshi that Virendra wanted to draw Purvi's painting but not Sakshi's painting.

© Copyright tellybest.com, 2020, 2021. All Rights Reserved. Unauthorized use and/or duplication of any material from tellybest.com without written permission is strictly prohibited.
Cached Saved on: Tuesday 28th of September 2021 07:52:06 AM