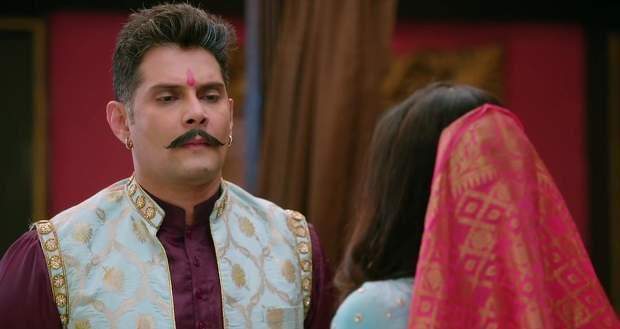 Today's Molkki 21 January 2021 episode starts with Purvi revealing that Vaibhav is the one who raped Priyashi while Virendra does not believe her.

Vaibav defends himself while Prakashi argues with Purvi and tells her to say that it is a lie.

Virendra says that it is a huge matter of injustice and will be taken to the Panchayat.

He gives Purvi an ultimatum that if she isn't able to prove Vaibhav guilty then she will break all ties with him amd his kids and leave the village forever.

She accepts the deal and they leave to go to Panchayat.

On the way, Bheem and Yogi support Purvi's wording saying that she must have a reason to say while Anjali, Jyoti and Prakshi blame her only.

The session starts while Anjali tries to incite Prakashi against Purvi while Virendra says that Purvi gets the chance to say her statement first.

Purvi recalls the day of the picnic and how she saw Vaibhav running away from the window while she saw Priyashi in an unmentionable state.

Vaibav defends himself while Purvi state that she also saw Vaibhav's friends looking through the window.

She confronts their friends but they refuse to look into the window and say that they were watching a video on the phone instead.

Purvi states that his friend, Radhika is missing and pleads him to get her there to give the confession.

Vaibav turns the tables by saying that Priyashi was after him from the start and that she called him into the room that day and flirted with him.

Priyashi comes forward and says that she was tricked into going the room by Jyoti but Jyoti denies everything she says.

Elsewhere, the servants sent by Virendra look for Radhika in the mansion and notice a room locked from the outside.

They open the door and get shocked to see Radhika's dead body with a knife going into her stomach.

© Copyright tellybest.com, 2020, 2021. All Rights Reserved. Unauthorized use and/or duplication of any material from tellybest.com without written permission is strictly prohibited.
Cached Saved on: Tuesday 2nd of March 2021 12:24:36 PM