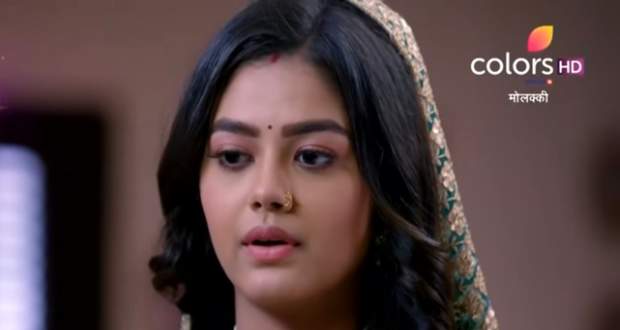 Today's Molkki 21 July 2021 episode starts with Purvi telling the kids that Virendra is angry and that they won't be able to attend Nandini's wedding.

Kids give her an idea but Purvi refuses saying that Virendra won't listen to her now.

In his room, Veer asks Sudha for help in selecting jewelry for Nandini and requests to try on the jewelry so that he can get an idea.

Sudha gets shy and agrees after which he is helping her when Purvi comes there. Later,

Virendra is thinking about how to stop the wedding when two of Charansingh's servants come there and give him sweets with an invitation card saying that the wedding is at 10 PM.

However, Virendra tears the invitation card and tells them to leave after which he leaves without listening to Purvi making her tensed.

Nandini and Aarav get ready for marriage when Veer comes there and gives Nandini her gift making her happy.

However, Purvi comes there and requests them to postpone the wedding for a few days as Virendra is in a rage to stop the wedding anyhow.

Aarav gets sad while Nandini curses Virendra saying that he doesn't care about anything other than himself which is why he sent away his mother.

Later, Virendra comes to the wedding venue with the rifle and shoots the name tag at the reception hall.

Virendra's men destroy the wedding hall while Virendra threatens the priest and finds out that Charansingh has changed the wedding venue at the last moment.

Virendra wonders who went against him while flashback shows Purvi telling Charansingh to change the wedding location.

Virendra is unable to find Nandini after checking every wedding hall and decides to go home.

The priest tells them that it's time for Kanyadan and that this wedding cannot happen without it.

Just then, Purvi comes there and says that she will do the Kanyadan while Nandini looks at her in shock.

The priest asks about her relationship with Nandini and Purvi replies with mother.

© Copyright tellybest.com, 2020, 2021. All Rights Reserved. Unauthorized use and/or duplication of any material from tellybest.com without written permission is strictly prohibited.
Cached Saved on: Monday 17th of January 2022 09:49:46 AM