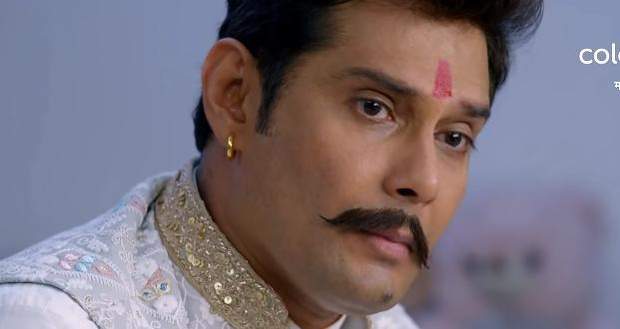 Today's Molkki 21 June 2021 episode starts with Virendra getting jealous recalling the dinner incident while Purvi also comes there to give dinner for him.

He talks to her and realizes that it was Sakshi's plan that Purvi should feed him.

The next morning, Purvi falls from a chair but Vipul saves her while Virendra witnesses it.

Vipul tells him that Sakshi told him to seek Purvi's help after which Virendra goes to Sakshi and confronts her.

However, Sakshi challenges him that Purvi will herself accept the marriage proposal with Vipul in one week and he agrees.

Purvi talks about her childhood memories with Vipul while Sakshi decides to arrange a night out and invites him.

However, Virendra makes him busy at work while Sakshi makes an excuse of going to the kitchen and goes somewhere else.

Suddenly there is a power cut and Sakshi comes there with Vipul and the oil lamps.

Later, Vipul and Virendra play the Dog and Bone game and Vipul wins while Virendra tells Purvi that he lost because she flirted.

The next day, Sakshi tells Vipul to go with Purvi to the market but Virendra tells gives him some other work and goes on a surprise picnic with Purvi.