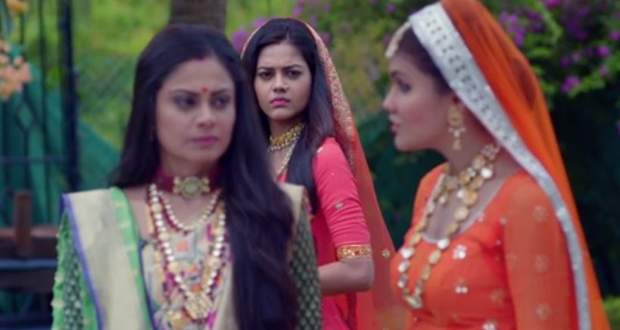 Anjali shows a video to Sakshi in which Virendra is thanking villagers for keeping painting competition in Haveli.

Anjali says that he wishes to draw Purvi's painting.

Sakshi obstructs Anjali's words and says that she is the one who said to Virendra to draw Purvi's painting.

Sakshi rebukes Prakashi and Anjali not to interfere in her life.

Later, Purvi tells Juhi and Manas to ask Virendra that he remembers his wedding anniversary or not but he doesn't remember anything.

Sakshi gets ready for her wedding anniversary but Virendra forgets the occasion which makes Sakshi upset.

Meanwhile, to make Sakshi happy Purvi plans and she sends Juhi and Manas to tell about Virendra's surprise to Sakshi and also sends them to Virendra to tell him about Purvi's surprise.

Virendra brings a special gift to Purvi and he gives it to Sakshi thinking that she is Purvi.

By seeing Sakshi, Virendra gets shocked and Sakshi feels happy for his special gift.

On the other hand, Juhi and Manas tell Purvi about their fancy dress competition in school while Sakshi gets upset as her children share that with Purvi instead of her.