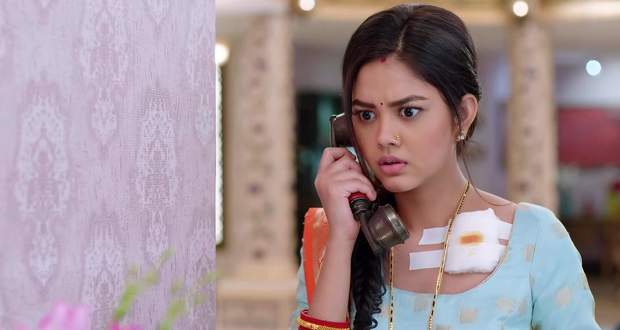 Today's Molkki 22 December 2020 episode starts with Virendra hesitantly doing Purvi's dressing as per the Nurse's instructions while the song 'Lal Ishq' plays in the background.

Meanwhile, Vaibhav gives Priyu DVDs to watch and ease the tension and she thinks that maybe she misunderstood him earlier.

The next Day, the family goes to the hospital and Purvi feels happy to see the kids.

Doctors discharge Purvi with the instructions to take care of herself as she is still weak.

Juhi and Manas give Purvi a get well soon card while Sudha tells her how she found out about Kallo Tai.

Purvi feels happy looking at the greeting card while Virendra puts a pillow behind her back and smiles at her.

In the morning, Purvi is getting the kids ready for school while she gets a piece of paper from Juhi's bag.

She doesn't think much of it and throws it in the dustbin while the driver watches it from afar and feels revealed.

Purvi gets a call from the school and is informed that the kids are not attending the school which shocks her and she informs Prakashi and others.

Vaibhav calls the driver who drops the kids to school and he says that he dropped off the kids at school as usual.

Vaibhav, Purvi, and Priyu go to the school where the principal tells them that they have no option but to expells Juhi and Manas from the school due to their behaviour.

Upcoming Molkki episode update: Kids to get scolded by Virendra.