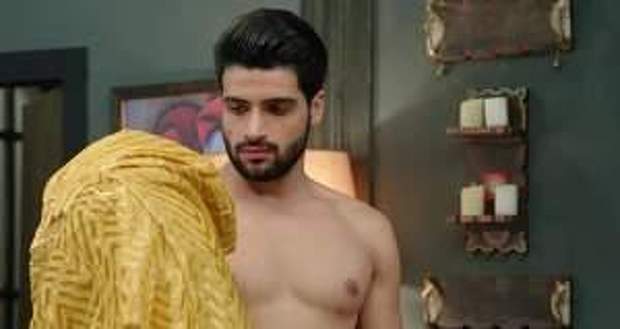 Elsewhere, Anjali says that Purvi is falsely dragging his family into the matter.

The kids hear servants saying that Purvi was talking about a phone being the evidence to prove her innocence.

They decide to take the drivers help and go to the repair shop to fix the phone they dropped in the paint.

Meanwhile, Priyashi asks the driver, Ramukaka to reveal that he saw her and Jyoti going towards Vaibhav's room the other day.

However, Ramukaka declines seeing them while a flashback shows Vaibhav threatening him to not reveal anything to anyone.

Virendra is about to punish Purvi and Priyashi while the servants come there and stop him.

They bring Radhika's dead body there and informing that they found the body in Vaibhav's room which was locked from outside shocking everyone.

Purvi and Bheem inform that they saw Vaibhav and Radhika going into his room.

His friends also think that Vaibhav killed her and reveal that he was away with her for a while.

Vaibav accepts that he locked her in his room but didn't kill her.

Purvi asks Virendra if Radhika gives her statement then he would punish Vaibhav and tells Radhika to get up.

Suddenly, Radhika gets up and says that it is true that Vaibhav raped Priyashi and locked her in his room but revealed that the act of being killed was her and Purvi's plan to get Vaibhav to confess.

However, Vaibhav states that it is not solid evidence when the kids come there and gives her the phone saying that they got it replaced from the repair shop.

Purvi tells the kids to go home and shows Virendra the video.

Virendra picks up a wooden stick and starts beating Vaibhav while rebuking him.

Vaibav insults Priyashi saying she is a village girl while Purvi stands for her amd rebukes both him and Virendra.

Upcoming Molkki episode update: Virendra tries to cheer up Purvi and apologise to her.