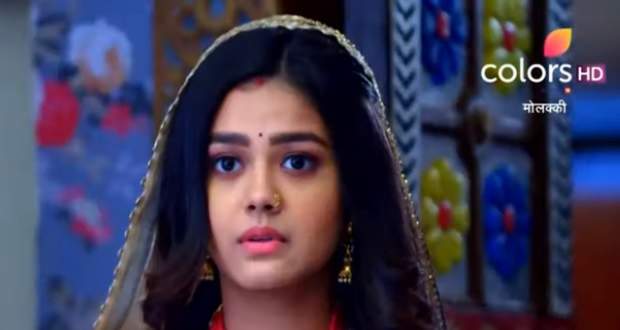 Today's Molkki 22 July 2021 episode starts with Charansingh video calling Virendra and shows him the marriage while Virendra gets shocked seeing Purvi there.

Charansingh reveals that Purvi is the one who influenced them in changing the wedding venue and marriage rituals.

Later, the wedding completes and Aarav and Nandini are about to take Purvi's blessing but she leaves with the kids saying that she has fulfilled her responsibility.

The kids worry thinking that Virendra will be angry but she calms saying that she will convince him.

She goes to Virendra but he confronts her and leaves saying that she is no less than an enemy for him as she ruined Nandini's life.

Elsewhere, Nandini's Grahpravesh ritual gets complete while Charansingh tells his wife that he will use Nandini to control Virendra.

Nandini calls Veer and he informs her of the fight between Purvi and Virendra and decides to return their room to Purvi.

Nandini tells him that they will call her Purvi and not Molkki from now on.

The next day, Veer requests Purvi and Virendra to return to their room but Virendra mocks them and tells him to take Purvi as he will stay in the guest room.

Virendra goes to fix the water pump while Purvi goes after him.

He argues with her while she falls on him and they share an eye lock.

© Copyright tellybest.com, 2020, 2021. All Rights Reserved. Unauthorized use and/or duplication of any material from tellybest.com without written permission is strictly prohibited.
Cached Saved on: Tuesday 28th of September 2021 07:03:17 AM