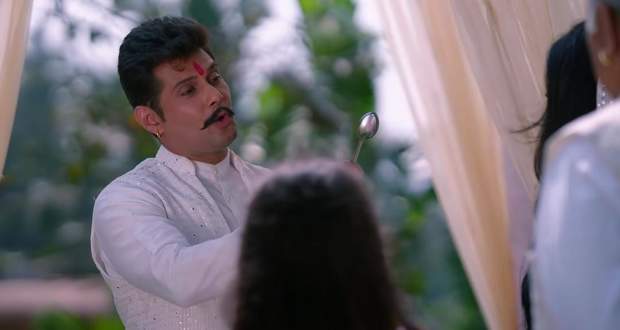 Today's Molkki 23 April 2021 episode starts with Purvi telling Virendra that he will forget everything once he sobers up and goes but Virendra thinks to prove to her that he wants her to be his wife.

The kids are playing and Sakshi goes to their room.

Bhuri notices that the door is open and is about to go there but Sudha lies to her and takes Sakshi from there.

Bhuri and Anjali drink Thandai and talk about how they tricked Virendra and Purvi to misunderstand each other. Purvi overhears them.

Purvi feels bad for behaving rudely with Virendra and decides to apologise.

Sudha is on her way out with Sakshi while Virendra calls for everyone's attention.

He says that Purvi has changed his life and praises her in front of everyone.

He announces that he will give her the rights of a wife and will marry her again.

He invites the whole village to the wedding while everyone gets happy except Prakashi, Bhuri and Anjali.

Virendra kneels on the ground and asks Purvi if she will marry him and she says yes.

They hug and celebrate by dancing with everyone.

Sudha lets go of Sakshi's happiness in distraction and Sakshi goes away.

Sudha congratulates Purvi while she asks her about Sakshi.

Sudha hides the truth from her and tells her that she will take Sakshi with her to NGO.

Meanwhile, Sakshi stands under a shower while Prakashi and Anjali stand shocked to see her.

© Copyright tellybest.com, 2020, 2021. All Rights Reserved. Unauthorized use and/or duplication of any material from tellybest.com without written permission is strictly prohibited.
Cached Saved on: Thursday 5th of August 2021 10:28:50 PMCached Disp on: Friday 6th of August 2021 03:05:40 AM