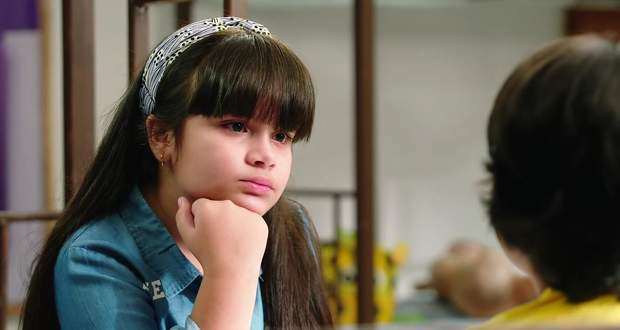 Today's Molkki 23 August 2021 episode starts with Virendra taking the kids to the boarding school and going to their room to drop them.

Meanwhile, Purvi also goes inside to give the interview while Chandni and Daksh stand outside and talk.

The principal tells Purvi that they cannot give her the job while she requests him to give her one month to prove herself.

Elsewhere, Chandni scolds Daksh while he stays adamant on his decision to reveal the truth to Nani and win Dhwani's heart wisely.

Virendra leaves the kids while thinking about Purvi as she also starts exiting the school after getting accepted for the job.

The kids try to run after Virendra to not leave them there when they get surprised seeing Purvi and start calling her Haathi.

They are about to go to them when the Sister stops them and tells Purvi to leave.

Later, Nani is making Purvi try on new jewelry while Juhi and Manas think to inform Virendra about Purvi and ask a Sister for the phone.

However, the Sister refuses saying that children are allowed to make a phone call only on Sundays.

Elsewhere, Daksh tries to inform the truth Nani but she's distracted in preparing for the engagement when he gets a call from Virendra.

Daksh informs Purvi to get ready for dinner with Mukhiji while the kids try to get the phone at night but get caught by the security.

© Copyright tellybest.com, 2020, 2021. All Rights Reserved. Unauthorized use and/or duplication of any material from tellybest.com without written permission is strictly prohibited.
Cached Saved on: Wednesday 3rd of August 2022 02:32:52 PMCached Disp on: Thursday 11th of August 2022 04:38:47 AM