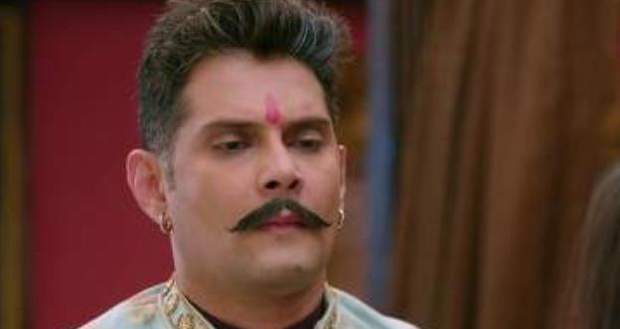 Today's Molkki 23 February 2021 episode starts with Virendra announcing that Vaibhav will get hanged as a punishment for killing Priyashi while he is being taken away.

Prakashi begs Vaibhav to not kill Vaibhav but Virendra tells her that it's ruled that the killer should not have the right to live and goes from there with Purvi.

Vaibhav is about to be hanged but Prakashi stops them and once again begs him to not hang Vaibhav.

Virendra tells her that he can't spare Vaibhav while Vaibhav is trying to untie his hands.

Prakashi begs Purvi to stop Virendra but Purvi says that it is the decision of the Chief and not her husband.

Vaibhav manages to free himself and runs away while others are distracted.

He steals a car and goes while the police and her family go after him.

He reaches a dead-end to a cliff and tries to run away but the police manage to catch him.

Vaibhav manages to get a hold of the gun and tells Virendra that he is the reason he did this and points the gun at him.

He says that Vaibhav never believed in him and accepted Priyashi's lie without any proof.

He is about to shoot Virendra but he stumbled on a rock and falls while Virendra gets the gun and points it towards him.

Vaibav tries to go upwards the hill while Virendra points the gun at his leg and shoots.

However, Vaibhav slips due to which the gun pierces through his chest area and he falls.

Vaibhav is being taken away in an ambulance while

Police tell Virendra that he has to go to the police station with them while Purvi cries and begs the police to not take him away.

He is taken away on the jeep while Purvi runs after it and falls.

Later, Prakashi cries in her room while Anjali comes there and instigates her against Purvi and Priyashi saying that they are the reason Vaibhav is dead.