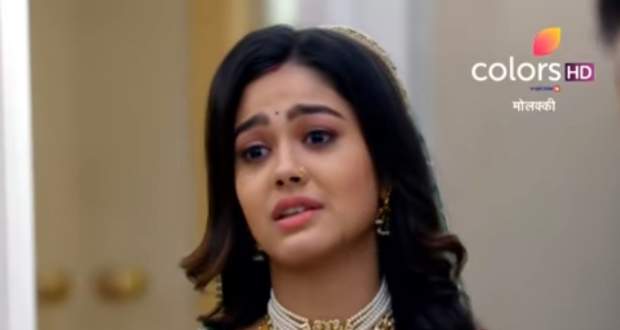 Today's Molkki 23 July 2021 episode starts with Virendra and Charansingh arguing outside the party office and going inside to take part in the election.

Meanwhile, Nandini reaches haveli and scolds Prakshi and Anjali after hearing them talk bad about Purvi.

Nandini says that only Purvi was there apart from her brother for her wedding and asks for her.

Purvi comes there and they go upstairs to discuss something. Chaudhary and Virender submit their nominations.

Chaudhary taunts Virender again and leaves. Nandini gifts Purvi a designer lehenga and expends a hand of friendship towards her.

She thanked her for coming to her marriage and do her Kanyadaan.

Chaudhary's wife tells him that they will lose all the respect they have if they lost the elections while he tells her that Virendra will give him his seat willingly as he has Virendra's weak spot.

Purvi and Nandini hug while Virendra comes there and accuses them of backstabbing him and tells Nandini that she has no relation with the haveli anymore.

Nandini reminds him that she is the rightful owner of the house and tells him that he is just a guest.

She leaves after telling Purvi to send Veer to pick her up for the Pagphere ritual.

Virendra argues with Purvi but sue tells him that it is him who is responsible for the distance creating between him and Nandini as he is unwilling to bend for his daughter.

Later, Priyashi feigns a sprain to get close to Veer and he picks her in his arms after which Purvi sends Sudha with Veer to pick up Nandini.

Elsewhere, Nandini learns that Aarav is wounded and asks him how it happened to which he starts making excuses but later tells her the truth.