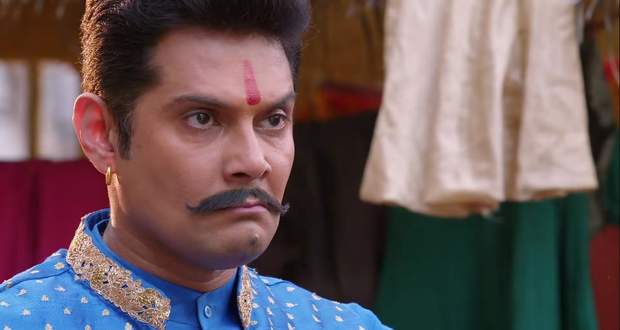 Today's Molkki 23 November 2021 episode starts with Virendra seeing Purvi distracted and tells her to not worry and think about their anniversary party the next day.

Further, he goes to Renu and convinces her to join the party while she thinks that she has started hating Purvi cause her father is the one who had left her at the brothel.

The next day, Purvi gets ready for the party while Virendra comes there gifts her earrings.

Further, she gives him a brooch and he holds her high in his arms as she fixes it to his Turban.

Meanwhile, Sakshi gets angry seeing them and thinks that her plan will create chaos for them.

Virendra acknowledges the guests and calls Renu on stage saying that his sister has come back into his life and will stay with him from now on.

Virendra asks her what he did and she reveals that he is the one who had left her in the brothel for her to become a dancer.

He tells his servants to lock up Mahesh and comforts Renu.

Later, Renu is crying in her room while Purvi comes there and tries to console her saying that she also hates Mahesh as he had sold her as a Molkki.

Meanwhile, Prakashi and Anjali praise Sakshi as she reveals that she had heard about Mahesh from Renu.

© Copyright tellybest.com, 2020, 2021. All Rights Reserved. Unauthorized use and/or duplication of any material from tellybest.com without written permission is strictly prohibited.
Cached Saved on: Wednesday 1st of December 2021 11:48:32 PMCached Disp on: Monday 6th of December 2021 08:20:18 AM