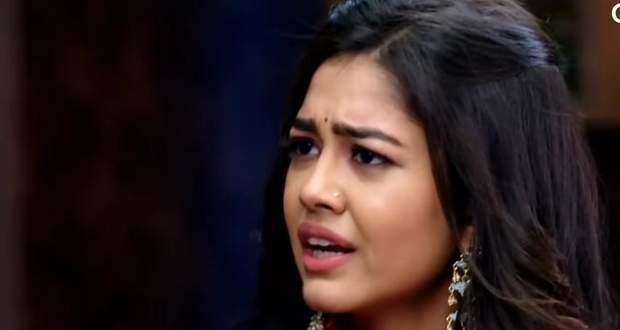 Today's Molkki 24 August 2021 episode starts with Daksh and Purvi coming to the hotel and Purvi staying back to talk to Chandni on call.

Purvi goes outside while another girl wearing a white saree stands in her place.

Virendra asks Daksh if his fiancé is wearing white and he agrees.

Chandni tells Purvi and Daksh to come to the hospital immediately as Nani had an asthma attack and leaves with Daksh after calling him.

Veer tells Virendra that Dhwani and Purvi are not the same and decide to return home.

The next day, Manas and Juhi are doing the punishment outside the principal's office while Daksh drops off Dhwani.

He jokes with her and lifts her mood.

Manas and Juhi see Purvi and call her Haathi but she confuses it with a toy and tells them that she will help them find their toy.

However, the kids talk about Virendra and tell her to come with them but the teacher comes there amd scolds the kids.

Veer tells Virendra to leave as he will come later after finishing his work.

Juhi and Manas manage to steal the security guard's phone and tell Virendra to come back as they saw Purvi at school.

Virendra rushes back to school and the kids tell him that Purvi is in class 3 A while Purvi takes leave from the school to meet Nani.

Virendra looks for Purvi around the school while she leaves and he thinks to question the principal.

Elsewhere, Veer buts ankles from the jewelry shops while Sudha asks him to call if he is shopping for her.

Purvi meets Nani and Daksh at the hospital and he informs her about Nani's condition.

Later, he tries to take away Nani's phone when something falls from the bed.

They see that it is a sample of their engagement card and gets shocked.

Daksh tries to tell her the truth when Purvi holds his hand and leaves with him to talk to him.

She tells him to continue their drama as she cannot see Nani hurting.