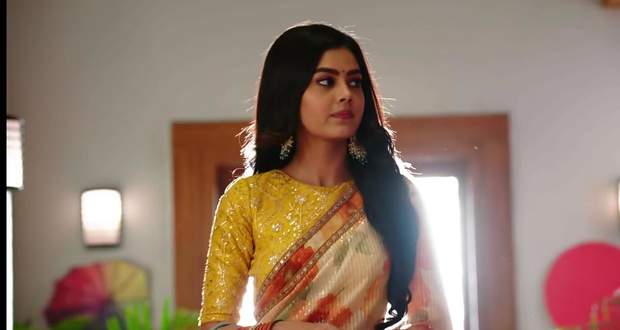 Today's Molkki 25 August 2021 episode starts with Virendra showing Purvi's picture to the principal and him confirming that she is Dhwani.

Virendra thanks the principal and leaves while thinking to go to Daksh's house.

Elsewhere, Purvi tells Daksh that they should carry on their drama until Nani goes back to London as Chandni comes there dancing.

They leave for the engagement venue while Virendra comes to their house.

The guard informs him of the wedding but fails to inform him about the location as he also doesn't know.

Meanwhile, Nani gives the family lehenga to Purvi and tells her to wear it for the engagement while she gets flashbacks of her past.

Virendra calls Daksh who invites him to the engagement and texts him the address of the venue.

Purvi keeps getting flashbacks of her past and wonders if it has happened to her before also.

Chandni sees Virendra and tries to flirt with him while he asks her about Daksh and Dhwani.

Elsewhere, Daksh gets mesmerized by Purvi's beauty and has a sweet fight with her while they share an eye lock.

She tells him to remember that they are doing a drama while he is lost in his thoughts.

He gets Virendra's call and goes downstairs while Purvi notices Virendra's car with her scarf and thinks to find out who that person is.

Virendra greets Daksh and meets Nani while Purvi gets her scarf from the car and sees Manas and Juhi's picture in the car.

Purvi gets stuck in the curtain and falls into the pool while Virendra saves her and gets shocked seeing that it is Purvi while she is busy untangeling their lockets.