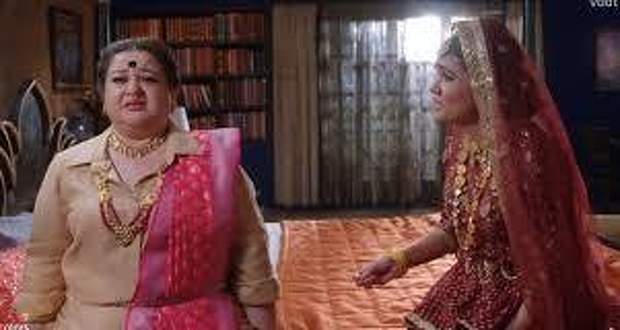 Today's Molkki 24 February 2021 episode starts with Virendra repenting his action of killing his own brother.

On the other hand, Anjali is trying to manipulate Prakashi that Purvi is the reason behind Vaibhav’s death.

But Prakashi tells Anjali that she is in the pain of losing her two children and yells at her to gets out of the room.

The next morning Purvi comes to Prakashi’s room and tries to console her.

Meanwhile, Anjali enters the conversation and blames Purvi for being the reason behind all the incidents.

Prakashi and family members come to the funeral of Vaibhav.

Virendra also comes in the police jeep for the funeral and apologies to Prakashi maa for his actions.

Prakashi forgives Virendra and tells him to do the funeral of Vaibhav.

During the funeral, Anjali gets a call and she leaves to attend the call which makes Purvi suspect Anjali.

Later that night Purvi visits Virendra at the police station and eats dinner with him.

Anjali goes to meet an unknown person who turns out to be Vaibhav.

© Copyright tellybest.com, 2020, 2021. All Rights Reserved. Unauthorized use and/or duplication of any material from tellybest.com without written permission is strictly prohibited.
Cached Saved on: Tuesday 20th of April 2021 07:07:56 PM