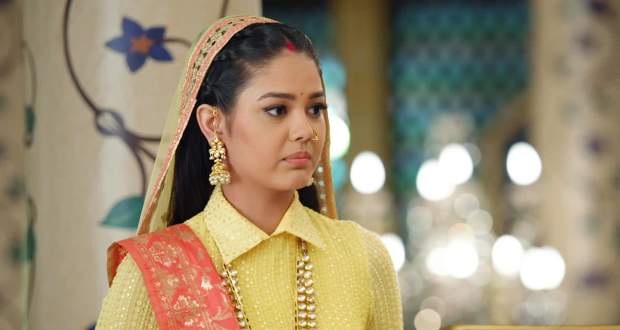 Today's Molkki 24 March 2021 episode starts with Purvi searching for Panditji. Meanwhile, Bhuri learns that Saakshi is gone and gets worried asks she will be scolded.

A chained woman has seen climbing the stairs of the temple while Virendra is ready for Pooja for his beloved first wife.

Purvi ignores Virendra’s call and later mocks him on the call. Virendra tries to console her and later comes in front of her.

He kisses his forehead and eyes to prove his love and later they hug each other. However, it all turns out to be a dream as Purvi is standing alone.

She is about to leave the room with Pooja material when Anjali locks the door and starts putting kerosene on the house.

Anjali lights a match stick and puts the house on fire. Purvi tries to escape the house and shouts for help.

Anjali tells Prakashi that she has set the house on fire in which Purvi was there. Prakashi learns that Sakshi has escaped and gets worried.

Prakashi and Anjali start searching for Sakshi while Purvi tries to call Virendra but fails. Sakshi hides when she sees Bhuri searching for her.

Virendra sees the miss calls of Purvi and rushes to save her from fire. Virendra and Purvi escape the house and share a romantic moment.

Purvi saves her Mangalsutra from falling while Virendra asks her to forgive him. Virendra leaves for the Pooja and Purvi is suspicious that someone tried to kill her.

Later, Purvi bumps into Saakshi and remembers the chained woman she saw earlier.