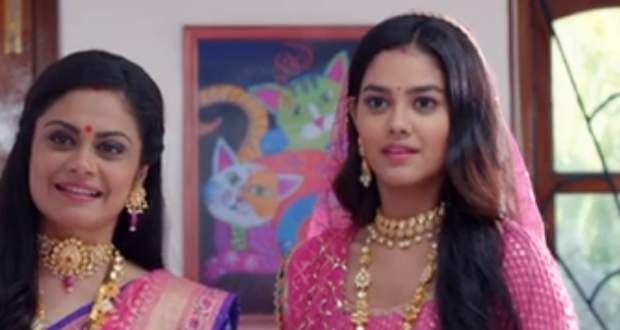 Today's Molkki 24 May 2021 episode starts with Manas sharing about his fancy dress competition character with Purvi.

Sakshi gets upset about Manas being close with Purvi but not with her.

Meanwhile, Sakshi gets a call from Aarti who is her childhood friend and Sakshi invites Aarti to come home.

Afterwards, Aarti and Vikas arrive at the Haveli and Sakshi feels happy to see them.

At the same time, Purvi brings tea for them and Vikas asks the family about her to which Prakashi replies that Purvi is Virender's second wife.

Later, Sakshi gets upset by seeing Juhi and Manas in the dresses which are already stitched by Purvi.

Sakshi feels happy about that and thanks Purvi for her gesture.

During dinner time, Purvi serves food for Vikas and he misbehaves with her by touching Purvi's hand while Prakshi observes them.

Purvi gets furious at Vikas's behaviour and tries to tell Virendra about it but Vikas obstructs Purvi's words and he diverts the topic.

After some time, Vikas again misbehaves with Purvi while she is serving a sweet dish to him to which Purvi slaps him for his misconduct.

© Copyright tellybest.com, 2020, 2021. All Rights Reserved. Unauthorized use and/or duplication of any material from tellybest.com without written permission is strictly prohibited.
Cached Saved on: Monday 29th of November 2021 07:51:03 PMCached Disp on: Wednesday 1st of December 2021 02:59:57 PM