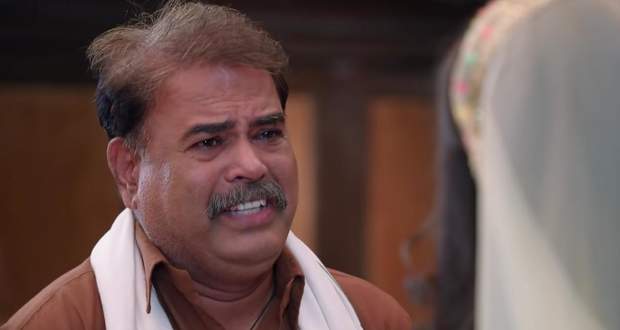 Today's Molkki 24 November 2021 episode starts with Purvi comforting Renu while Virendra comes there and tells her that he has called who will arrest Mahesh.

Purvi wonders out loud what will happen to her mother while Virendra tells her that she will stay with them after Mahesh's arrest.

Later, Virendra goes to Mahesh's room with the police and gets him arrested while he says that Purvi is the one who ordered him to leave Renu at the brothel.

He lies that one rainy day Purvi bumped into him when he was taking Renu to the haveli while she told him that she wants to take revenge on Virendra and ordered him to leave Renu at a brothel.

However, Purvi says that it isn't true and reveals that she had met Mahesh on that day but he threatened to kill her and took Renu with him even after her trying to follow him.

Virendra refuses to believe Mahesh and tells the police to take away Mahesh but Purvi's mother stops them and says that Mahesh is saying the truth.

Flashback shows, Sakshi bribing Mahesh to lie that it was Purvi who ordered him to send Renu to the brothel while Purvi's mother refuses but Sakshi threatens to kill her son and makes her agree.

Renu fumes at Purvi and rebukes her while she keeps saying that she didn't do it.

Virendra takes Mahesh towards the ledge and threatens to throw him while ordering him to say who did it.

Sakshi tries to add fuel to the fire saying that Mahesh is a liar but Purvi's mother is not while Virendra tells Purvi that she doesn't need to justify herself to anyone.

Police take away Mahesh while Sakshi tries to instigate Renu against Purvi and fails.

At night, Sakshi goes to Purvi's mother and shows her a video of her son begging to ne saved and tells her to convince Purvi to bail out Mahesh from jail.

© Copyright tellybest.com, 2020, 2021. All Rights Reserved. Unauthorized use and/or duplication of any material from tellybest.com without written permission is strictly prohibited.
Cached Saved on: Thursday 4th of August 2022 12:24:45 AMCached Disp on: Wednesday 17th of August 2022 04:51:15 PM