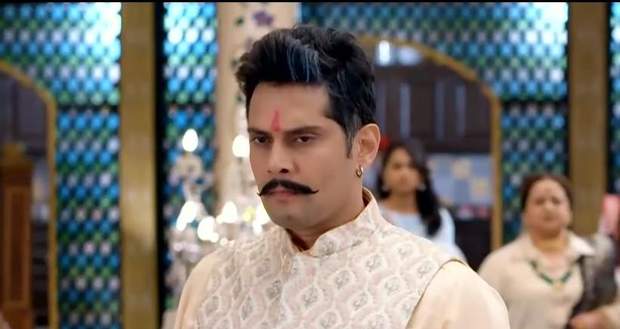 Today's Molkki 25 December 2020 episode starts with Purvi feeling pain in her shoulder and Virendra reminding her to take her painkillers.

Virendra goes without talking to her and she thinks that he is still mad at her for questioning his parenting method.

Purvi apologises to her for talking with thinking while he takes something from the cupboard and leaves.

Purvi goes after him and sees that he is going inside the which she is told to stay away from.

Bheem reveals to Purvi that it is Shakshi's room and says that he always goes there when he is upset.

Bheem reveals to Purvi that he can't look at the kids because he blames himself for the accident which caused Shakshi's death.

Bheem tells Purvi the story of how Sakshi died and says that Virendra distances himself from the kids because of self-guilt.

At midnight, someone is seen going inside Sakshi's room and getting jewellery from the locker.

Purvi asks Prakashi and Bheem to help her with something special and they agree.

Meanwhile, Anjali goes to the kids and give Juhi gifts. She further gives her a big box and tells them something after which the kids leave with the box.

Bheem tells Virendra that they have to go for an urgent Pooja and leave.

Jyoti sits beside Vaibhav and he goes to sit with Priyashi.

Purvi goes to Virendra and requests him to help her make the cake Juhi wants.