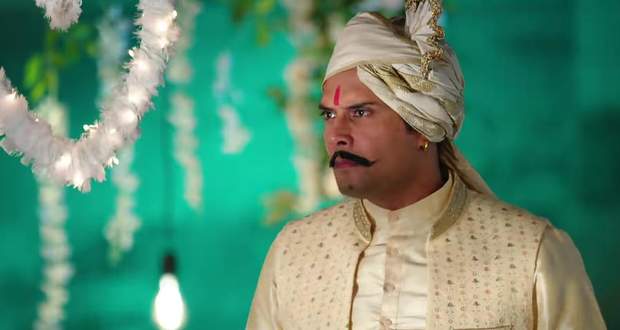 Today's Molkki 26 August 2021 episode starts with Purvi trying to remove the lockets while Daksh comes there and addresses her as Dhwani.

Purvi gets flashbacks of her past while Daksh thanks Virendra and tells him that he has become his family for saving his Dhwani.

Later, Purvi wonders why Virendra called her Bawri while Virendra thinks that Purvi has changed her identity as Dhwani due to being upset at him.

Nani tells the DJ to play romantic songs and Dhwani and Daksh dance while Virendra gets jealous.

Elsewhere, Veer gifts a lehenga to Sudha while hiding the anklets in his pocket.

The DJ announces the game Swipe the Partner and everyone dances while Virendra dances with Chandni to get close to Purvi and talk to her.

He gets to Purvi and tells her why she doing the drama and explains how he is living without her for the past six months.

Further, Nani announces that it is time for the engagement ceremony and tells them to exchange rings.

However, Virendra thinks to stop the engagement.

© Copyright tellybest.com, 2020, 2021. All Rights Reserved. Unauthorized use and/or duplication of any material from tellybest.com without written permission is strictly prohibited.
Cached Saved on: Wednesday 1st of December 2021 09:35:49 PMCached Disp on: Monday 6th of December 2021 12:53:51 AM