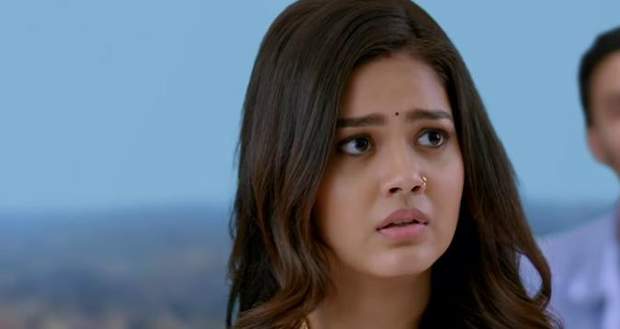 Today's Molkki 26 February 2021 episode starts with Virendra and police surrounding Vaibhav while he throws his suitcase towards them and starts running as the police chase him.

Meanwhile, Anjali reaches the police and tries to act innocent in front of Purvi thinking that she found out Vaibhav while Purvi and Sudha go from there.

Police manage to corner Vaibhav and make him remove his fake get up while Manas and Juhi talk about Vaibav, Purvi and Viremdra while Prakashi looks at them.

Virendra tells Vaibhav that he can't run away anymore while Purvi tells him that she knew his plan already as she was the one who replaces the bullets in the gun.

Prakashi looks on while the flashback shows Purvi planning everything and replacing the bullets with the replicas after finding the gun in Vaibhav's room.

Another flashback shows Inspector calling Purvi snd informing her that a train ticket has been bought under Anjali Pratap Singh while Purvi figures out that she is involved with Vaibhav.

Kids think that the olders are playing a game and go to Vaibhav while he puts a gun near Manas' forehead and threatens to kill them.

Vaibhav says that Purvi and Virendra are responsible for this while Purvi pleads with him to let Manas go.

Purvi goes to him and distracts him while Virendra goes from behind and kicks the gun out of Vaibhav's hand.

However, Vaibhav manages to get hold of a gun and aims it at Purvi and is about to shoot her while someone shoots him from behind.

The fog goes away while everyone gets shocked to see Priyashi holding a gun.

Vaibhav is taken away in an ambulance while police handcuff Priyashi and take her away.

Later, Virendra and Purvi go to meet Priyashi while she tells him what happened the day Vaibhav dropped her off the cliff.