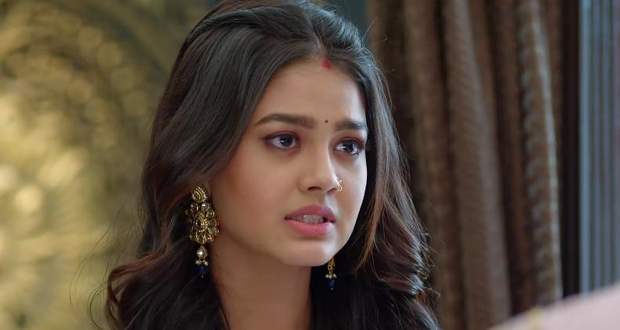 Today's Molkki 26 January 2021 episode starts with Priyashi telling jeweller to take the jewellery that Vaibhav like and goes while Vaibhav goes after her and asks her what is she doing.

She tells him that she married him for his money and to get revenge on him after which she goes.

Anjali goes to Vaibhav and advises him to find something that Priyashi did to use it against her.

Elsewhere, the kids ask Virendra if he gave the phone to Purvi and she forgave him to which he replies that she still didn't forgive him.

The kids tell him to buy clothes Purvi and he goes downstairs.

He goes downstairs and shows clothes to Purvi but she says that she doesn't like them and says that their mindsets don't match.

Virendra picks up a blue dress and tells Purvi to wear it and she goes.

She can't reach the back strings and tells the kids to help her but Juhi says that she doesn't know how to tie the strings and goes saying that she'll send help.

She sends Virendra to help Purvi and he offers Purvi to tie her strings and she accepts.

She says that she has endured a lot in the past seven days while Virendra asks her what he should do to get her into forgiving him.

She asks him if he would be her servant for seven days and he agrees but Purvi tells him that she won't forgive him even after that.

Later, Anjali adds chilli powder in Priyashi's Haldi while Jyoti comes there and Anjali informs her about the plan.

Jyoti wonders why Priyashi isn't crying in pain while Vaibhav starts burning in his face and starts shouting.

A flashback shows Purvi getting suspicious and switching the Haldi bowls.

Everyone gets distracted in the celebration while Virendra takes some Haldi in his hands planning to apply it on Purvi's face.

However, Purvi takes the Haldi bowl and applies it on Virendra.

He also applies the Haldi on her face while Bheem and Prakshi get happy seeing them together having fun.

Virendra takes Purvi to the side and makes the whole plate of dry Haldi fall on her head while Anjali gets furious seeing them.