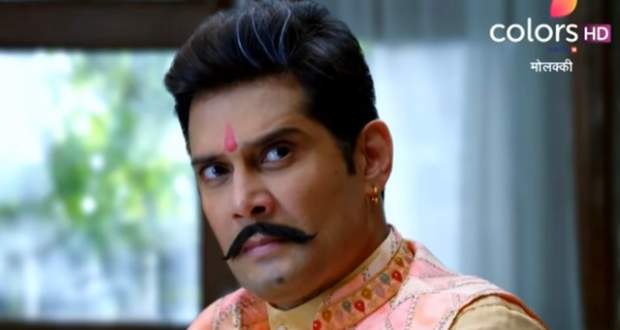 Today's Molkki 26 July 2021 episode starts with Purvi telling the kids to help her if she fails and goes to give the sweet pudding to Virendra.

However, he refuses to have it and the kids come there while doing the drama kf crying and make them hug.

Purvi tightly hugs Virendra as he tells her that he is still upset with her and is hugging her because of the kids.

Later, Prakashi and Anjali do the preparations while Veer and Sudha convince Purvi to come with them to bring Nandini for the Pagphere ritual.

They leave while Anjali and Prakashi get furious thinking that their plans going wrong because of Molkki.

At Nandini's house, a servant accidentally spills tea on Purvi and she goes towards the bathroom to clean it when she hears Aarav and Charansingh talking.

She returns from the bathroom and Charansingh's wife greets her as Purvi informs her that she is there to take Nandini for Pagphere ritual.

Charansingh refuses by saying that their close relatives are coming for the Muhdikhai ritual and tells them to come back after a few days.

Later, Nandini questions Aarav about what Charansingh wants him to do when Charansingh comes there and pushes Aarav from the stairs.

He tells Nandini to do as he says if she wants her husband alive.

Afterward, Nandini comes to the haveli drenched in rain and tells Virendra that she is willing to give him a chance at their relationship but he will have to withdraw his name from the elections and let Charansingh win.

Virendra refuses to do so and Nandini leaves crying while Purvi sees her.

The next morning, Virendra's cast is removed and Purvi massages it while she asks about last night's incident.

Virendra tells her to not interfere between a father and daughter.

Later, Nandini comes to haveli and requests Virendra to withdraw his name from the elections.

© Copyright tellybest.com, 2020, 2021. All Rights Reserved. Unauthorized use and/or duplication of any material from tellybest.com without written permission is strictly prohibited.
Cached Saved on: Monday 1st of August 2022 12:49:54 AMCached Disp on: Wednesday 17th of August 2022 03:43:36 PM