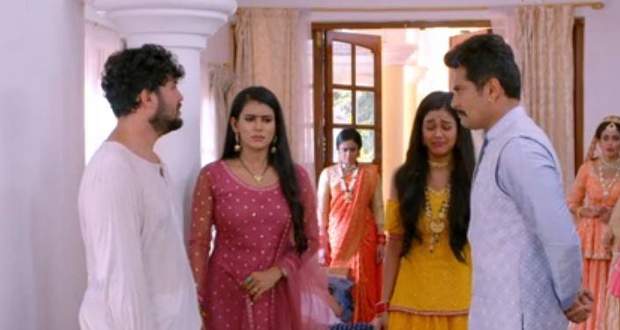 Today's Molkki 26 May 2021 episode starts with Virendra returning to Haveli after looking at Purvi's missed calls.

Meanwhile, Purvi takes care of Juhi who is slipped from the ladder while saving her from Vikas.

Afterwards, everyone gets shocked by seeing Juhi in the unconscious condition and asks Purvi.

Purvi replies that Vikas forced and harassed her and to save her from Vikas Juhi slipped from the ladder.

By listening to this, Virendra gets furious and tries to beat Vikas.

Thereafter, cunning Vikas lies that Purvi is lying about him and says that he is a good person.

Vikas also says that Virendra is a good judge but he is accusing him without proofs.

At the same time, Manas shows the proof of video recording which he took of Vikas harassing Purvi.

After seeing the Video, furious Virendra beats Vikas and says to Aarti and Vikas to get out of their haveli.

She also says that Sakshi's life will get spoiled by Purvi and by listening to this Sakshi leaves from there.

On the other hand, Virendra going to Delhi for some work and he wishes to meet Purvi before he leaves.

Purvi comes to meet him but Anjali stops her and assigns another work to do.