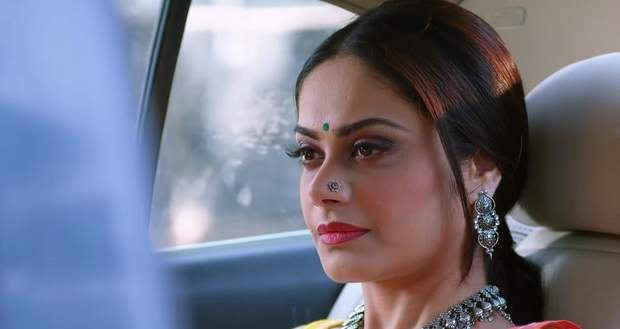 Today's Molkki 26 November 2021 episode starts with Purvi tries to make up an excuse but Virendra goes to the locker and gets shocked seeing the money missing.

He questions the staff while Purvi lies that she gave the money to Sudha for some NGO work.

Later, Sakshi tells Renu that she had seen Purvi taking out the money at night and tells her to do as she says.

Virendra cones there and Renu tells her that she wants to work in Sudha's NGO requests to accompany him.

At the NGO, Renu tells Sudha about Purvi coming to the NGO the previous day and donating a huge sum of money but Sudha denies anything happening which confuses Virendra.

Later at haveli, Purvi returns home and Virendra asks her where she way.

Purvi lies that she was at the NGO but gets shocked at him saying that he knows she was not there and that she did not give any money to Sudha.

She starts hesitating while Sudha comes there and saves her by saying that Purvi donated the money but did not tell her and she got to know about it after talking to Virendra.

Flashback shows, Sudha telling Purvi about meeting Virendra and Purvi requesting her lie if the situation comes to it.

In the present, Purvi drops Sudha at the gate and tells her that she doesn't understand Renu and reveals that she saw Renu having the money that she gave her the previous day and still asking her for money which leads to this drama.

Sudha tells her to be careful and leaves.

Afterward, Purvi goes to Renu and asks her if she has a problem with her and reveals that she saw her having the money she had earlier given her and still asking for money in front of Virendra.

However, Renu lies that she wanted to buy a gift for Virendra as his is coming up and questions her if she is doubting her.