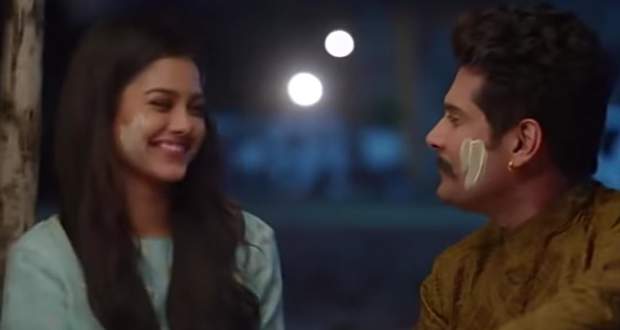 Later, he takes her to the beach and spends romantic moments with her.

Purvi makes Virendra remember all the promises he made to her and makes him apply Haldi to her.

Meanwhile, Sakshi looks through the glass window and sees that the girl who helped her is there with a man.

She shouts for help and bangs on the glass window but they don't hear her.

Purvi tells Virendra that they should go as the family will be awake and they leave.

They manage to reach the mansion on time and he leaves with the promise that he will write his name on her Mehandi.

Virendra plans to give a letter to Purvi in his tiffin and opens the tiffin box to read a note asking for help.

Flashback shows Sakshi putting the note in the tiffin box.

© Copyright tellybest.com, 2020, 2021. All Rights Reserved. Unauthorized use and/or duplication of any material from tellybest.com without written permission is strictly prohibited.
Cached Saved on: Thursday 27th of January 2022 01:30:40 PM