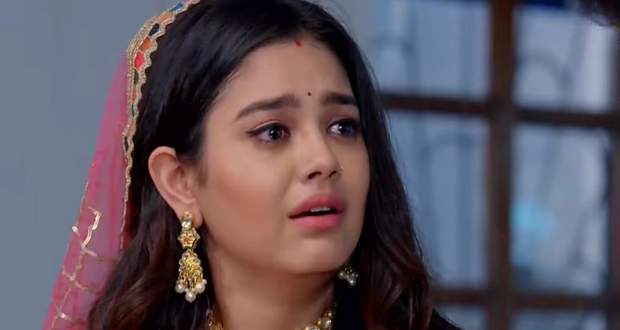 Today's Molkki 27 May 2021 episode starts with Virendra meeting Purvi while he is leaving for Delhi.

Meanwhile, a pregnant lady comes to Purvi in a hurry and gets unconscious.

Purvi takes her into the room for first-aid. Sakshi comes there and says that the lady is Aarti's sister Radhika.

At the same time, Radhika's parents ask Sakshi to send Radhika along with them but Radhika doesn't want to go with her parents.

Later, Sakshi calls Aarti about Radhika and Aarti says that Radhika ran away from her in-laws home to stay with her college boyfriend.

After some time, Purvi obstructs Saksi to send Radhika along with her parents but Radhika's parents ask them to send her daughter and leave from there.

Meanwhile, Radhika says to Sakshi and Purvi that her in-laws are trying to abort her because the baby in her womb is a girl. In order to save the baby,  Radhika ran away from home.

On the other hand, Prakashi makes a plan with Aarti and Vikas to get to Radhika and to take revenge on Purvi.