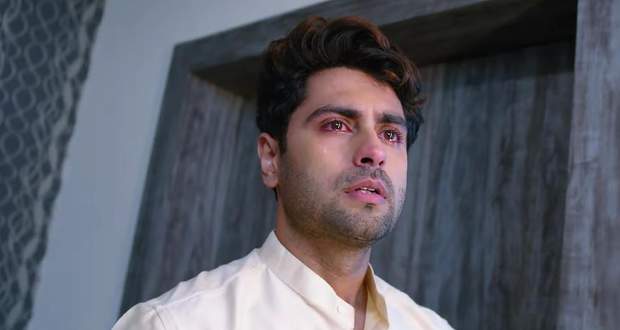 Today's Molkki 27 September 2021 episode starts with Daksh advancing towards Purvi while she hits him with a vase and his head starts bleeding.

He throws her on the bed as she tries to leave and tells her that she is the reason for his state and that she can't cheat him.

Purvi's clothes get torn in the process while Virendra shouts from the window at Daksh to let Purvi go.

Daksh rebukes him for cheating him and coming to take back his Molkki in lieu of the business deal and states that Purvi will become his no matter by will or by force.

Virendra break the window but realised that there are grills and goes towards the room to break it open and save Purvi.

Virendra takes the gun from his guard and gets since the room by shooting the doorknob and points the gun at Daksh while warning him to leave Purvi.

The ladies go towards Daksh's room to stop Virendra while Veer and Priyashi notice them and follow after them.

Meanwhile, the kids wake up and ask guard about Virendra seeing him not in the room and the guard tells them to stay in the room as he finds Virendra.

Nani, Veer and everyone else tries to convince Virendra to drop the gun while Daksh infuriates him saying that Purvi is only his.

The kids hear a gun shot and go to look for Virendra while Daksh is seeing blessing from his chest and falling on the bed unconscious.

Nani tries to wake up Daksh and starts crying realising that he is dead while Virendra recalls aiming at Daksh's shoulder and says that he didn't shoot Daksh.

Police comes there and Nani tells them to arrest Virendra while he keeps saying that he didn't kill Daksh.

He gets taken away by the police as Priyashi smirks while Purvi comforts the kids.

Meanwhile, Prakashi and Anjali get happy thinking Virendra is out of heir life.