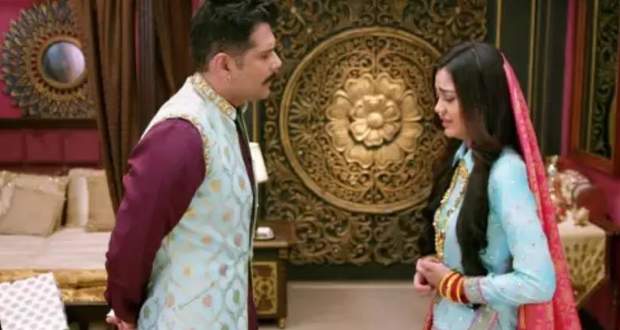 He takes the comes from them and tells them to go to sleep while remembering his moments with Purvi.

He decides to fulfil Purvi's wishes from now on as his friend and puts Mehandi on her hand.

In the morning, the kids come there and tell Purvi how colourful her Mehandi looks while she wonders who did it.

The kids hint that Virendra did it and tell her to come downstairs for dance practice for the Sangeet ceremony.

Anjali and Jyoti leave saying that they need to get outfits for the ceremony while Purvi wonders if they are planning something.

Prakashi makes Virendra and Purvi do dance practice and they learn the steps after which the dance teacher tells them to practice in the side.

They dance while Virendra asks her when she will forgive him and she responds that when she believes in him.

He asks her when and she tells him to keep trying and maybe one day she'll start believing him to which he agrees.

Vaibhav's friends make fun of him for having to marry a village girl because of a small bet while Priyashi comes there and pours him a drink.

She tells him that she'll ruin his life and goes.

Elsewhere, Purvi stands in front of Anjali's room wondering why there is a packed suitcase in the middle of her room.

Bhuri asks her why she is standing there while Purvi asks her where she was going in the middle of the night and whom those medicines were for.

Prakshi calls Purvi and she goes while telling Bhuri that she'll find out soon which tenses her.

Later, the ceremony starts as the host announces dance performances while Anjali gets a call and tells Jyoti that she has to go.