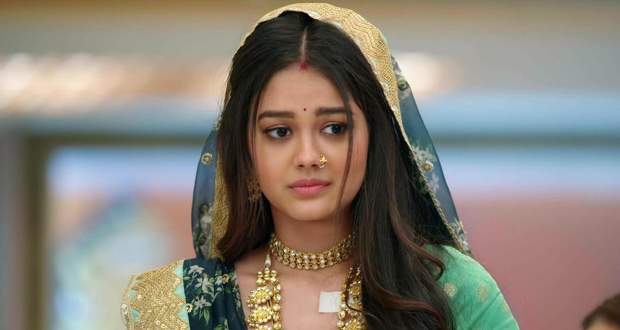 Today's Molkki 28 May 2021 episode starts with Aarti asking Sakshi to send Radhika back with them.

Sakshi refuses and says that Radhika's in-laws are trying to abort her baby.

Meanwhile, Aarti says that Radhika is lying and also says that her mother’s health condition is bad because of Radhika.

At the same time, Anjali and Prakashi manipulate Sakshi to send back Radhika with Aarti.

Later, Sakshi sends back Radhika with Aarti even if Radhika refused to go.

By listening to Radhika's screaming, Purvi comes there and asks Sakshi that why he sent back Radhika with Aarti and Vikas.

Sakshi tells Purvi that Radhika is lying and says that she is doing correct by sending Radhika with them.

Thereafter, Purvi sees Radhika screaming for help while they are taking her along with them.

Purvi decides to save Radhika from Aarti and Vikas and goes in search of Radhika.

© Copyright tellybest.com, 2020, 2021. All Rights Reserved. Unauthorized use and/or duplication of any material from tellybest.com without written permission is strictly prohibited.
Cached Saved on: Thursday 20th of January 2022 10:36:33 PMCached Disp on: Friday 21st of January 2022 05:23:53 PM