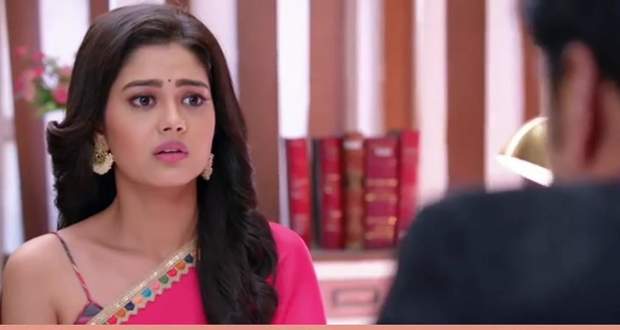 Today's Molkki 28 September 2021 episode starts with Purvi reaching the police station with the kids while the inspector informs her that Virendra's case has been transferred to Rewari and that he has been taken there.

The next morning, Purvi meets Virendra and apologies to him saying that everything is her fault while he tells her that he wonders how the bullet could hit Daksh on the chest when he aimed for his shoulder.

Later, she meets up with the lawyer and the lawyer encourages her that the case will surely be on their side after which the court hearing starts.

The opposition lawyer says that it is an open and shut case as Virendra killed Daksh without any motive and that he also has witnessed it.

Virendra's lawyer says that it was an act of self-defense to save his wife, Purvi from being raped but the opposition lawyer objects saying that he doesn't have any witnesses to prove it.

Further, the opposition lawyer calls all the people present during Daksh's death one by one and they all give statements against Virendra saying that he intentionally killed Daksh.

Purvi tells Virendra's lawyer to say something while he says that he can't do anything as even Virendra's own family is against him while flashback shows Prakashi bringing the lawyer to lose the case.

The judge announces a break of five minutes while Purvi goes to Virendra and tells him that she believes in him that he didn't kill Daksh intentionally which makes him glad.

After the break, the judges announce the case as rarest of the rare and punishes Virendra to a death sentence stating him as guilty, and orders the police to hang him in two weeks

Purvi pleads in front of the judges while the judge suggests she take the case to the supreme court.

Upcoming Molkki episode update: Purvi finds out about the lawyer being bribed and slaps him.