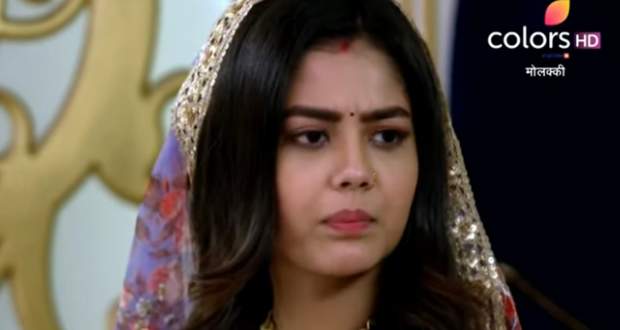 Today's Molkki 29 July 2021 episode starts with Sarah refusing to go with Purvi and Veer hitting him to making him fall unconscious. They all three manage to sneak out and leave in a car.

At present, Purvi tells Nandini and Virendra that Aarav is safely at their haveli resting. Virendra and Nandini praise Purvi and they share a hug.

Later, Veer also comes there and calls Virendra his father and they again share a family hug.

They come to the office and Virendra throws ink on him saying that he is going to fight the elections against him.

Charansingh threatens him about Nandini and Virendra starts beating him but others take him away.

Later, Virendra is again announced as the Mukhiya of the village and he requests Veer to make him wear the new turban.

Priyashi and Sudha both get happy seeing Veer on stage.

Later, Veer gets injured while playing with the kids and Sudha goes to get medicines while Priyashi is ignorant of the situation. Purvi notices it and admires Sudha's care for Veer.

At night, Purvi is making her bed and Virendra comes there and they romance.

Elsewhere, Charansingh meets someone and tells him that even after all their efforts, he couldn't become Mukhiya.

The person is revealed as Aarav and he talks about how he faked his injuries and fooled Nandini to get revenge on Virendra.