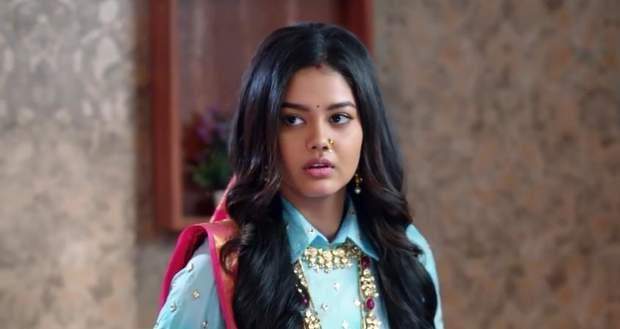 Today's Molkki 29 March 2021 episode starts with Prakashi stumbling upon the kids and scolding them for getting out of the house while taking them home.

At home, kids refuse to eat without Purvi while Bhuri tries to make them eat.

Anjali throws the food on the floor and says that their Haathi will never come back.

Juhi comforts Manas and talks back at Anjali and Anjali slaps her.

She scolds them and tells them to cry in their room while Bhuri looks on.

Purvi slides her chair near a table amd pretends to be asleep while a goon comes there goes while putting his phone on charge.

She manages to free herself by rubbing the ropes with the leg of the table.

Elsewhere, Sudha gets tenses being unable to find either Sakshi or Purvi and informs Priyashi of it.

Sudha tells her that she even tried contacting Virendra bit her efforts were in pain and suggests informing the police.

They file a missing report to the Inspector and he assures them that Purvi will be found before Virendra's arrival.

Purvi manages to break free from the ropes while thinking about the kids and Virendra.

Prakashi takes out a gun from her cupboard and says that it is time for Purvi to leave the world and that she will do it that day.

However, the police come there which shocks Prakashi and Anjali.

Prakashi hides the gun while the inspector informs them about Purvi's disappearance and tells them that they are there to inquire.

Purvi opens the ropes from her legs when a goon comes there with food and tells her to eat it.

She hits him with a stick when he's distracted and takes his phone while he lies unconscious.

Kids see an incoming call and answer to hear Purvi saying that she has been kidnapped and that she is in the go down near Sakshi mill.

The goons snatch his phone amd slap Purvi while the kids decide to not tell Prakashi anything.

The goons take her inside but she attacks him with a knife amd he screams in pain.

Meanwhile, Juhi calls Sudha and informs her about Purvi's call.