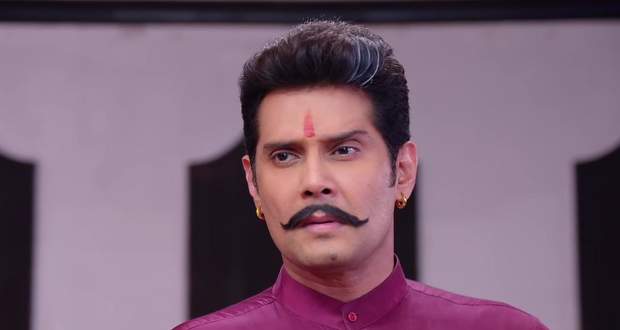 Today's Molkki 29 September 2021 episode starts with Purvi telling Virendra that he took the punishment to save her and promises that she will get him out of jail.

The police officers advise her to talk to her lawyer about reopening the case and she goes to meet her lawyer but gets shocked seeing him taking money from Prakashi.

She rebukes the lawyer wnd he leaves from there while Purvi starts rebuking Prakashi and Anjali but they blame her for Vaibhav's death and justify their actions.

Purvi says that she will not let Virendra get hanged and leaves to meet another lawyer.

Purvi talks to the lawyer and he demands 5 lakhs to fight Virendra's case leaving Purvi tensed.

Later, at haveli, Purvi takes out the necklace that Virendra had gifted her and talks about selling it while Prakashi and Anjali stop her.

However, Purvi says that it is her's as Virendra gifted it to her when Veer comes there and tells her that she has no right on anything as he is the owner of all the properties and valuables technically.

Priyashi comes there and insults Purvi addressing her as Molkki and throws her out of the haveli while Juhi and Manas run down the stairs and hug Purvi.

Sudha comes there and Priyashi also tells her to get out with Purvi and the kids while rebuking her as Veer offers to see her money every money but Sudha refuses.

© Copyright tellybest.com, 2020, 2021. All Rights Reserved. Unauthorized use and/or duplication of any material from tellybest.com without written permission is strictly prohibited.
Cached Saved on: Monday 1st of August 2022 10:43:54 AMCached Disp on: Thursday 11th of August 2022 05:24:09 AM