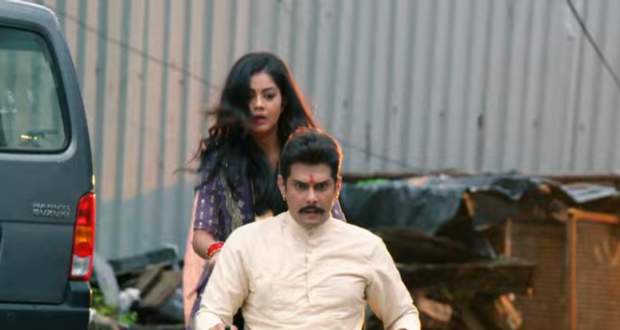 Today's Molkki 2nd August 2021 episode starts with Purvi and Virendra managing to hide while Charansingh walks past them.

Purvi wheels out Virendra's wheelchair from there and throws some things on the road to distract the dogs.

At haveli, Priyashi tries to seduce Veer by wearing a beautiful red saree and bringing him to her room while Anjali records everything.

Purvi gets tired of running while a dog catches up to them.

She decides to scare off the dog while Charansingh and his goons hear the dog barking.

Priyashi asks Veer to click her pictures and she grazes her checks while putting the hair behind her ear.

Purvi and Virendra hide and try to run but Charansingh hears the noise and goes after them.

Meanwhile, Priyashi spikes Veer's juice and he falls unconscious as she claims their pictures together.

Charansingh shoots Virendra and leaves after mocking him and hoping he dies.

However, Purvi manages to get a cart and takes him in the cart.

At haveli, Veer wakes up and sees Priyashi crying who makes up a fake story of how even she felt dizzy after drinking the juice.

She starts drama of losing her dignity and no one to marry when he tells her that he will marry her.

© Copyright tellybest.com, 2020, 2021. All Rights Reserved. Unauthorized use and/or duplication of any material from tellybest.com without written permission is strictly prohibited.
Cached Saved on: Monday 6th of December 2021 03:02:25 AM