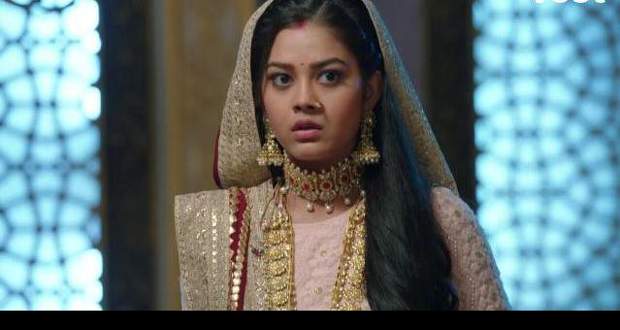 Today's Molkki 2 February 2021 episode starts with Anjali pushing Manas and making him fall on glass shards while Purvi notices and goes to him after telling Priyashi to stand at that place only.

Purvi tends to Manas while Anjali makes Priyashi unconscious and she takes away Priyashi with the help of Jyoti and Bhuri.

They manage to hide in the storeroom and Jyoti changes into Priyashi's clothes.

Jyoti gets scared while Anjali tells her that she will bear any punishment Virendra will give them and locks Priyashi in the cupboard after which they lock the storeroom and leave.

Purvi looks for Priyashi and thinks of Jyoti as her and go after them but collides with a guest and is about fall but Virendra catches her.

Her necklace gets stuck in his outfit and tries to separate them while Virendra puts her hair behind her ear and compliments her.

She goes while Virendra stops her and says that they will go together for the Kanyadan.

Anjali makes Jyoti sit in the mandap and whispers to Vaibhav that her work is done while Purvi accidentally drops the oil on Jyoti's hand.

She takes her upstairs to easy her hand while Anjali gets tensed but feels relieved when they come back downstairs and start the wedding rituals.

It is time for Vaibhav to fill the bride's hairline when the bride opens her veil and reveals Priyashi which shocks him, Anjali and Bhuri while Jyoti stumbles in the storeroom.

The marriage completes while a flashback shows Purvi noticing the holy thread and the toe ring missing and purposefully dropping the oil on the bride's hand to take her upstairs.

At present, Anjali goes to the storeroom where Jyoti tells her how Purvi found her and made her switch place with Priyashi and locked her in the storeroom.