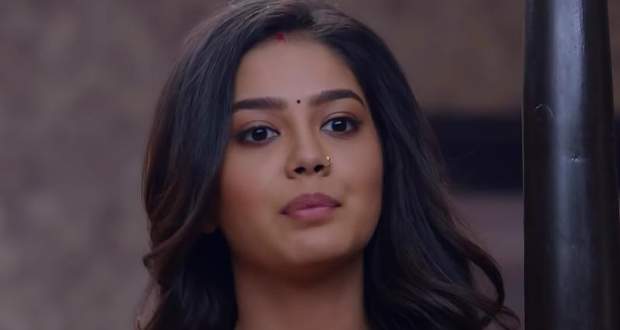 Today's Molkki‌ (मोलक्की) 2 March 2021 episode starts with Prakashi praying religious prayers while Anjali comes there and tries to instigate her against Purvi and Virendra.

However, Prakshi tells her to not try to instigate her and tells her that Virendra did what was right.

Anjali angrily stalks out of there amd asks Bhuri when is she going to the place.

Bhuri tells her that Purvi has been keeping a sharp eye on her.

Anjali says she will distract Purvi that night and order Bhuri go to that place that night.

Later, Purvi wakes up hearing a strange noise and goes out to see a shadow moving through the hallways.

She goes after the shadow when she sees a bloody handprint and gets frightened.

She runs into Anjali and shows her the place where the handprint was but it is not there which confuses her.

The next morning, Purvi and Sudha find out that their exams are prepared which makes them tensed while Karan comes to them and offers them his notes.

Virendra sees the house silent and asks Purvi about it.

Purvi says that the family members are disturbed due to the past events after which Virendra tells everyone to get ready as they are going on a trip.

He takes them to the village and shows them a movie.

Purvi imagines Virendra confessing his love to her and being romantic.

She opens her eyes to see the movie ending with her head on Virendra's shoulder.

Suddenly, the winds start blowing and Virendra tells everyone to go home.

Layer, Purvi wakes up to close a window while she sees Bhuri going out of the mansion and goes after her.

She follows Bhuri without being noticed and sees that she is going into an abandoned mansion.

Purvi opens the gate to go inside when a strange man suddenly stops her.

He tells her that he is the watchman of the mansion while she says that someone went inside but he denies it and tells her to go home.